For the self taught realist artist 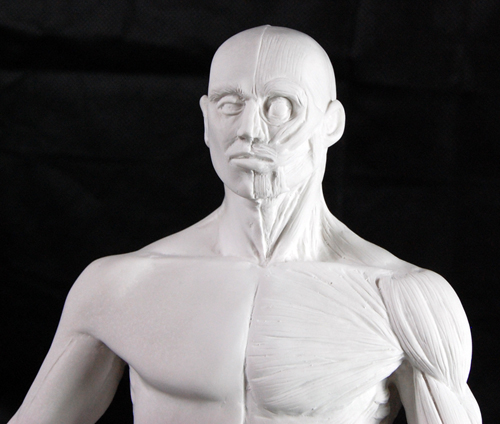 The classical ateliers also offer – besides drawing and painting classes – sculpting classes where you are taught anatomy either with an écorché figure or a nude figure (see here their Facebook photos with lots of sculpures!).

Écorché simply means flaying/skinning. An écorché figure is a sculpture where the bones and muscles are visible. Here I’ve already talked about some anatomy learning apps for your smart device.

I’ve already shown you how to make your own – and very inexpensive – plaster casts, but now I’m going to talk about how you can make your own reference sculpture without having to buy a large italian marble block and chissels. What you will learn is a three dimensional understanding of form (and patience!). That’s why the painting academies also teach sculpting.

Today’s materials are superior to those used by the old sculptors – like marble or clay. Marble allows no errors and clay would dry out too fast for a novice sculptor and it has to be baked at temperatures much higher than a regular kitchen oven.

Super Sculpey* is an oven curing synthetic clay which you can knead just like putty. After you are finished with your work, you can bake it in the oven so that it gets hard enough for finer improvements like carving details or sanding to a super smooth surface.

After having watched some Youtube videos (see the videos at the end of this post) I started to make a wire skeleton first and then built up an écorché figure.

Now comes the part where the story gets a little complicated for you as a reader but in brief: I made an écorché figure with Super Sculpey. Baked it, made a silicone mold, the figure broke and it looked awful, I made a new figure which is larger.

Super Sculpey has a skin color but in case you’d like to work with a grey clay like I did you can either do it by mixing one part of black FIMO* with 20 parts of Super Sculpey* or you can use Super Sculpey Firm*.

So here are the process pictures of my Super Sculpey 1:6 ecorché figure with skin on its right left side and skinned on its left side:

And this is how it turned out after one week of pure sculpture work and one week for molding/casting: 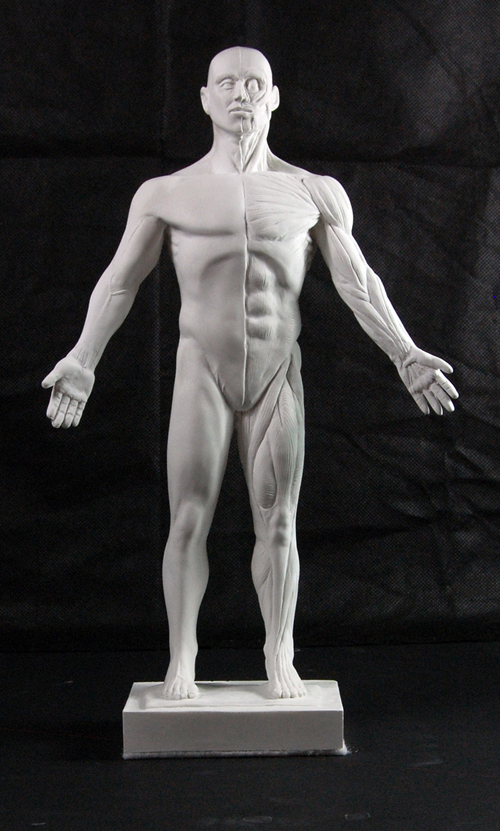 Here are the videos I watched prior to my project. Julian Khor’s channel has many many many videos, showing start to finish. You’ll learn a lot about anatomy, since Julian is building his figures from the bones up to every muscle.

Unfortunately there is no Part 1 – but here is part one of Julian’s Hercules Ecorche figure:

2 thoughts on “How to sculpt your own Écorché anatomy figure”

Get a free Planes of the Head sculpture

There are several ‘Planes of the Head’ on the the market but this one is absolutely free! Ok, at least it will cost you only four sheets of paper, some glue, printer ink and 2-3 hours working time.

Print your own Munsell Color Reference Charts at home on your desktop inkjet printer!

About
This page is intended as a source of information for art students who want to learn classical painting.

* Amazon Affiliate Program
The operator of the page participates in the Amazon partner program. On our sites, advertisements and links to the Amazon.com site are integrated through Amazon, where we can earn money through reimbursement of advertising costs. These so calles affiliate links are marked with an asterisk.